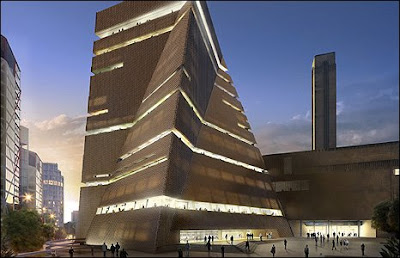 In yesterdays BBC News UK, Tate Modern's proposed £215m extension has been approved by the planners and the foundation. An addition to the London cityscape, the 11-storey brick and glass structure designed by Swiss architects Herzog and de Meuron will increase capacity at the gallery. Can you imagine? A bigger and better Tate Modern with more art to store, house and exhibit? I can't wait to go there. The revised project for the extension is expected to be completed in 2012 when Olympics come around. Tate Modern said £74m had already been raised towards the extension - a third of the overall cost. Tate director Sir Nicholas Serota said he was "delighted" the plans had been approved. Raise your glass and TOAST to London!