From the Melting Pot into the Fire 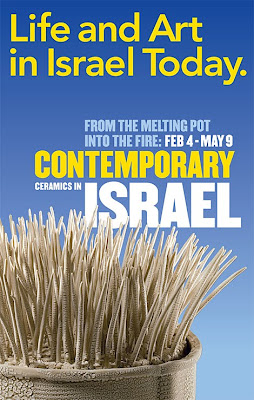 The Gardiner Museum of Ceramic Arts has given us a new perspective behind the power and poetry that ceramics have in the craft culture of contemporary Israel. The show brings together 37 works by 42 artists, touching upon aspects of immigration and geography that continue to define Israel's identity. Each of the work displayed at From the Melting Pot into the Fire attempts to capture the multi-cultural background of the country as well as each individual artist's oeuvre.
"Each artists and each piece tells a different story: some are witty, and while others are more poignant, each one will have an impact on its viewer," says Gardiner Museum Executive Director Alexandra Montgomery. To further enhance this individuality, accompanying captions to the works have been written by the artists themselves, rather than by a museum curator.

* Six Oy, 2006 by Ada Yoels *
Ceramic production using fire have existed for centuries and with the innovative approaches to contemporary practices, ceramics is a medium that has been used to express Israel's ongoing reflection on what it is to be an Israeli woman. Most are highly conceptual, while others are inspired more by formal concerns and desire to explore its materiality and aesthetic potential of ceramic art. 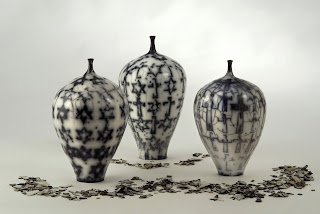 * My Melting Pot, 2006 by Martha Rieger *
The exhibition title itself refers to how Israeli society today is comprised of a rich variety of customs, traditions, values and people from around the world. As one enters the exhibition space, they will be greeted by the intimate and personal nature of the exhibition such as in Martha Rieger's My Melting Pot. Her piece consists of of three magnificent blue and white pots, decorated with Jewish and Christian symbols to celebrate the diversity of her unique heritage, being raised in Catholic Brazil by a Jewish-Christian family.

*  Forms, 2006 by Michaela Orstav (above left) and Sabras in a Tin Can, 2006 by Zipi Geva (above right) *
The issues of national identity and cultural existence are fashioned in issues involving food and presentation, including a stunning porcelain depiction of Sabras in a Tin Can by native-born Israeli Zipi Geva and Mirvat Issa's table full of bread, constructed out of clay and slabs. Likewise, the question of urbanism and urban spatial design have also been brought into the surface in City-Container by Daphna Leshem and Dvora Cohen's model pillars that she hand-built using clay, chamotte (grog) and iron.

* And the Pillar of Smoke Rises Before the Camp, 2006 by Dvora Cohen (above left) and City-Container, 2006 by Daphna Leshem (above right) *
From the Melting Pot into the Fire treats the themes of ceramics in contemporary craft as a globalized expression. More than anything, the conception of ceramics in this context is genuine and honest; providing the public with an escape from the vortex of silence.
From the Melting Pot into the Fire: Contemporary Ceramics in Israel will be on view until May 9, 2010. Click here to read more about the exhibition.
Exhibition Venue: Gardiner Museum
Posted by igy