Who Says It Doesn't Work? 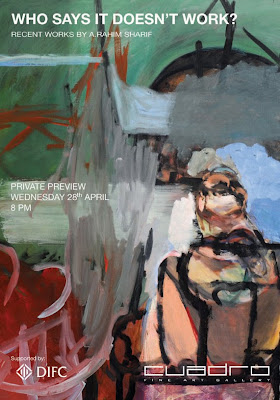 WHO SAYS IT DOESN'T WORK?

Recent works by A. Rahim Sharif

Throughout his artistic practice, A. Rahim Sharif has sought to challenge his viewers. At first glance, his work appears contradictory, forcing the spectator to delve deeper and reach higher levels of understanding and eventually introspection. His manipulation of colour and form allows him to daringly juxtapose contrasting themes such as torment and anguish with comical undertones. One way in which he achieves this contrast is by portraying dark subjects that are often sinister or troubled in bright, vivacious colours. Ironically, this contrast of light and dark, both emotionally and visually, results in an overall balance to the viewer, giving a sense of completeness to his work.

Sharif’s introspective nature also resulted in his fascination with the accuracy of portraying his subjects and emotions as a reflection on a particular moment in time. He often goes back and reworks his paintings once they fail to accurately mirror his emotions, juxtaposing both the history and immediacy of an emotion, evoking the contrast which is so pervasive in his work. This unique method of obliterating and recreating his pieces has allowed him to create images with a powerful sense of physical and mental energy.

In this new body of work Sharif breaks through set norms.   He paints with energy and urgency, employing loose, expressionistic strokes that are applied and stripped away from his canvases in an effort to deconstruct and redefine the conventional painting formula.

A.Rahim Sharif was born in 1954 in Bahrain. He obtained the National Supérieur Diploma of Fine Arts from L’École Supérieure Nationale des Beaux Arts in Paris in 1979 and graduated with a Masters in Fine Arts from the Parsons School of Design in 1981.