Stumbled upon a couple of images while tumbling around. I love the dynamic photography duo Mert Alas and Marcus Piggott. Mert and Marcus are celebrated for their devotion, skills and accomplishments in the fashion industry. Their editorial work is commonly found in fashion spreads throughout big publications such as W, Vogue, Interview and many more. 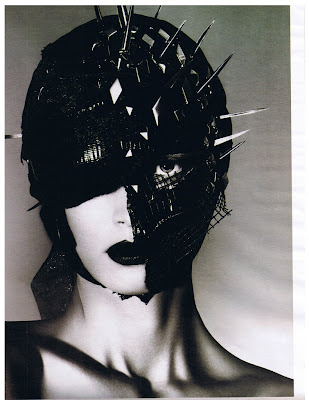 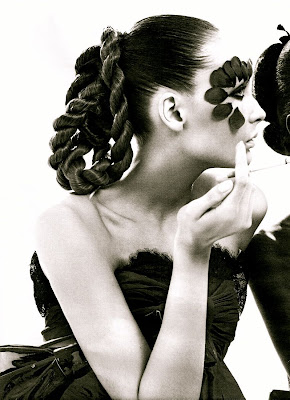 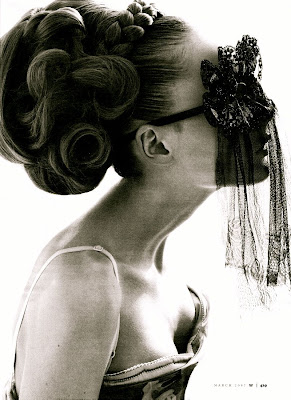 These specific ones are scans from some of their older work published in W Magazine sometime 2005 and 2006. 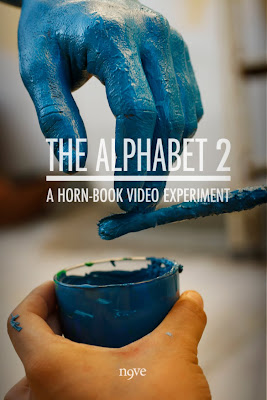 A charming short animation film by Alessandro Novelli, from the Italian, multidisciplinary design firm, n9ve. Just a couple of days ago, n9ve released and published the video online for its admirers to look into. It is the second video to the great Alphabet Series that I adore and follow. His short films are very inspiring and a lot of fun. I will get to that in a few seconds, but first, I must introduce his first Alphabet video that was produced sometime in 2010. In this older piece, he focuses on animating the names and look of each font family by presenting, and sorting them according their initial letter. Novelli's work is very crisp and clean--the simplicity of it is what makes it timeless (and effortless).

The Alphabet from n9ve on Vimeo.

The Alphabet 2 from n9ve on Vimeo.

Of course, similar to the first, the second piece is also presented in alphabetical order. The difference is what they refer to as "developmental spelling," in which each character visually represents the meaning of the word itself. Here, you will find the artist experimenting with different techniques and materials, to create a video hornbook. As you can see, this video is far more energetic and colorful, not as simple as the first. However, the concept (and 'backstage process') behind this 'think outside the box' approach to typography is mind-boggling. I remember doing such visual exercises and experimentation for my typography, even communication design classes way back when. It is not easy to execute such ideas successfully. A definite hit or miss. That is why I put Stefan Sagmeister on a pedestal because he seems to hit the bulls-eye; probably even when blindfolded.

Moreover, n9ve is more than just your average design studio, they are ardent devotees and excellent storytellers. As visionaries, it is their pride and glory to be able to create stimulating and evolving work that push the visual boundaries. While you are at it, I highly recommend tuning into this following stop animation video too--one of their first ones.

Experience Zero Gravity from Betty Wants In on Vimeo.

When discussing infinity sports experiences, this brilliant clip says it all. Words cannot describe the thrill this clip has given me. It is insanely awesome. Experience Zero Gravity films a couple of out-of-this-world cliff jumps across Norway, Switzerland, and France up to 6,000 feet. Yes, this well produced video by Betsy Wants In makes your heart skip a beat. Enjoy!

Produced by: Betty Wants In | Source: Gear Patrol
Posted by igy No comments:

Something Fresh from Reinoso 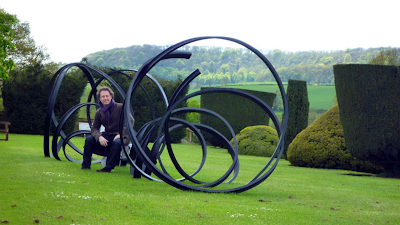 *PABLO REINOSO AND HIS BENCH SCULPTURE*
Pablo Reinoso's designs utter nothing but elegance and sophistication. Without compromising his oeuvre, Reinoso remarkably puts forward a vivid recollection of wabi-sabi aesthetics in his latest experimentation. 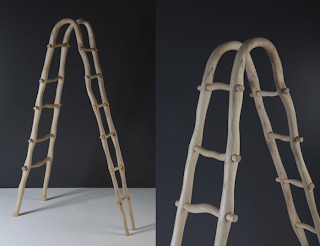 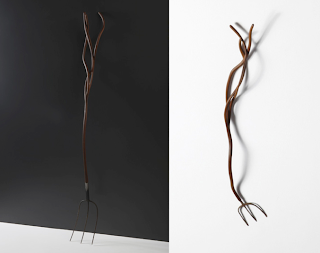 In his series, Tools, Reinoso re-imagines the existence of the everyday tool. Commonly seen as mass-produced, replaceable and/or durable objects, Reinoso proposes otherwise. Tools evoke an unspoken, romanticized side to these close-to-impeccable objects. The thin, elongated ends branch out into organic forms as if they are radiating life. 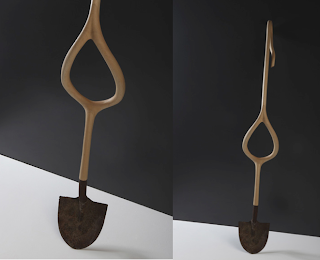 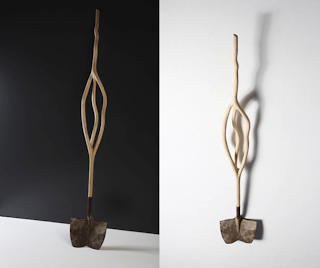 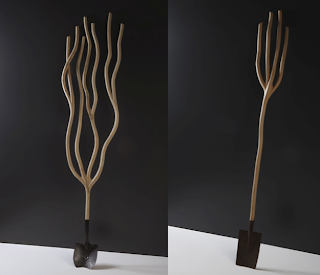 *TOOLS SERIES*
The series consist of 8 pieces including Escalera timida, Rufino's blues, La siesta del rastrillo, Pala ancha, Pala del Amor, Pala rampante, Pala rastrillante and Rastrillo rampante. Whether it is mounted on the wall or placed on the floor against the wall, these pieces possess a different level of beauty, one of which is not at all ephemeral like the ordinary objects we are familiar with. 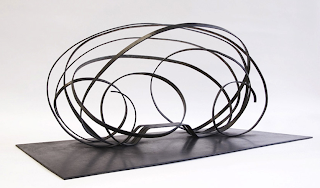 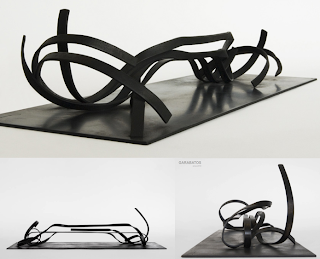 *E-STUDIO SERIES*
His other series, Garabatos, on the other hand takes on a much more abstract approach. The extension of his visual language and representation nonetheless resembles the ambiguities of modern poetry. Subtle and endearing, yet screaming autonomy and self-empowerment. 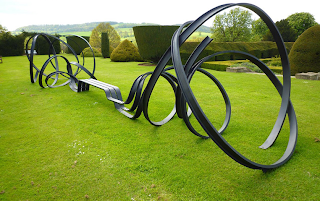 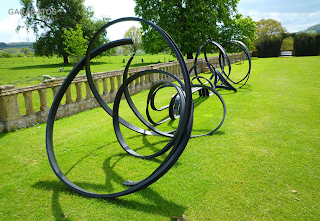 Images does not give it justice, but for the purpose of our current discussion, this should be sufficient. I included the Huge Sudeley Bench outdoor piece as well as some from the E-studios. 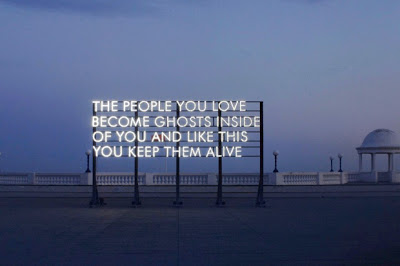 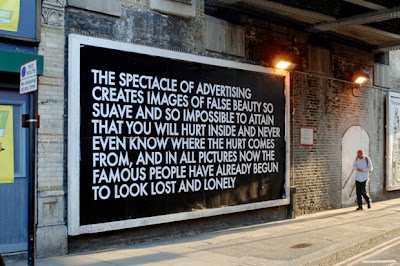 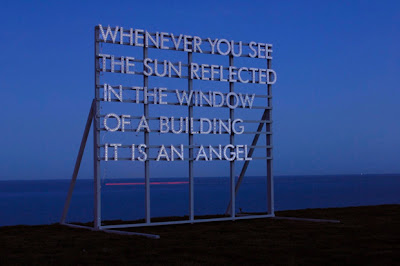 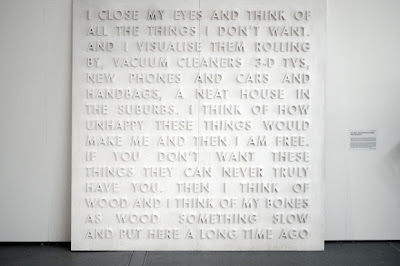 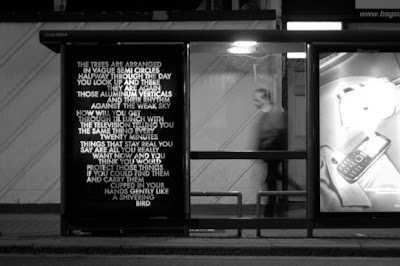 Read more about Robert Montgomery and his work in this Dazed & Confused interview.