Trailer - Marina Abramovic The Artist is Present from Show of Force on Vimeo.

Marina Abramovic is not just a pioneer, she is a woman of extraordinary charm. She is one of the most curious, bold, and hard-working woman in the arts. In the documentary, Marina Abramovic: The Artist is Present, we follow this fearless icon  as she prepares for the biggest exhibition of her life: a retrospective at The Museum of Modern Art in New York with a title "The Artist is Present." The film, nonetheless, is a documentation of the overall exhibition preparation, from its initial conception to its final execution. The 1 hour and 46 minute footage can be described as a raw take on her personal journey in finding happiness, overcoming challenges and struggles in the art world, development of trust in relationships and voicing her inner strength and peace within herself and her work. 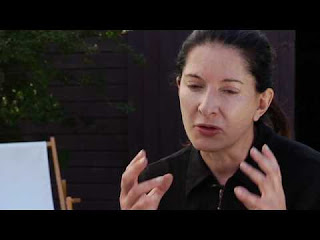 Abramovic is a strong, independent woman who is highly influenced by her past and present. Born in a strict Serbian household, she was exposed to discipline, power and knowledge from her parents but concurrently was introduced to warmth and encouragement of her beloved grandmother. As a result, she was able to, at a young age, explore and develop her own path as well as built a certain work ethic. 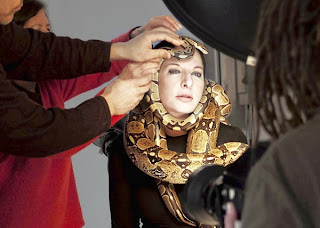 In the film, we dive into the artist's world, one filled with desire, passion and thirst for intervention and self-development. She has nurtured her own language, using her own body as a vehicle and pushing herself beyond her physical and mental limits. Her poise and positive attitude throughout her journey has proven nothing else but a seductive inner beauty. Despite the fact that some of her performances were labeled as outrageous or out of the ordinary by most audiences and critics alike, but by crossing those boundaries and expanding the truth beyond our conscience. Abramovic neatly summons us with an important sight of possibility and triumph. At the end of the day, we watched her influence her surroundings. She changed the way people view performance art and educates the act of redefining art. As she mentions in her film, one of the most common questions she often encounters is "What is art?" 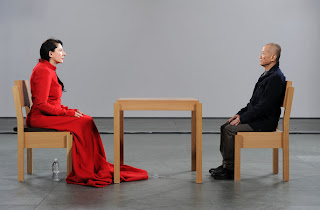 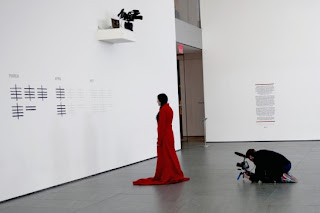 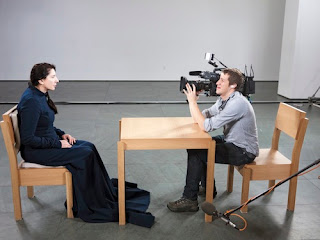 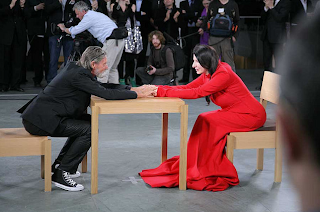 Indeed, Marina Abramovic is one of the most compelling artists of our time. Those who attended the exhibition during the time period understands the power she has on others. The striking presence she puts before us is quite extraordinary. We watch her every move, every blink of the eyes, every smiles and tears she shed. More than 750,000 visitors came through and many were granted the opportunity in participating in the interactive platform that she has long prepared for. It was stunning. 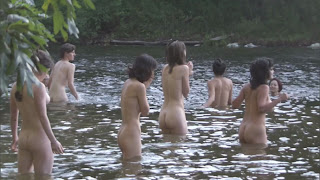 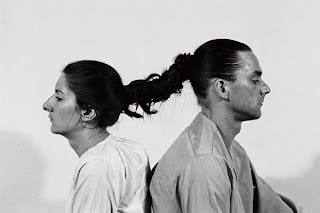 One of the most interesting part of the film is the "training" she provided for the other performers that have been enlisted to participate in this retrospective. The participants were invited to attend a mandatory retreat at Abramovic's house tucked away in Hudson Valley, in upstate New York. It was undoubtedly a beautiful and serene escape from the hustle and bustle of New York City. Starting from day one, each individual was asked to hand in their cell phone and give up all means of contact with the outside world. The overall program lasted for approximately one month. The point, in short, was that all participants were encouraged expand the level of concentration and push for the extreme--a level where he/she makes peace with their present. Through chanting, breathing exercises, holding various poses, indoor/outdoor activities, the intensity of practice were altered and monitored daily. By the end of the program, everyone was able to find comfort and security within one another, whether fully clothed or bare naked. 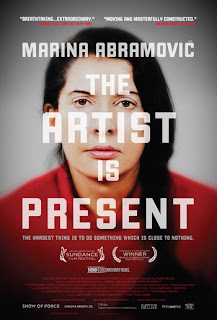 Last week was the final showing of this film at Film Forum, New York. There was a huge crowd flocking to the theater, lining up to get to it before its last showing for the day. Nevertheless, for those who have cable in their homes, another opportunity came forth. Most recently, HBO Documentaries aired a special screening of the film along with extras for viewers to see. It was a one day thing, quite exclusive. One exciting one was the directors interview. The clip below is taken from the HBO website that caters directly to this film.


Furthermore, Marina Abramovic is one artist that will heighten her presence and never slow down. For that, I find her nothing less than admirable. 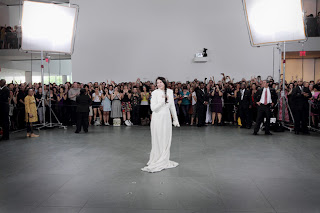